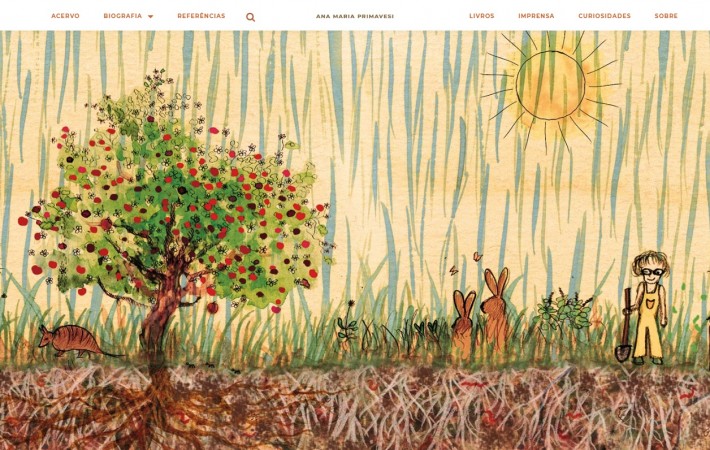 The urban population, increasingly concerned with eating organic foods, should turn their eyes to the countryside and research how food is produced there. Just a little bit, just a little bit, at Google, about organic farming, or agroecology, or even sustainable farming, which you’ll inevitably come across with a name: Ana Maria Primavesi.

In tropical Brazil, one can say without fear of making a mistake that if it were not for the soil fertility research of this agronomist who is turning 99 today – there is no typo here: it is indeed 99 years old ! – Organic foods would not be as widely available as they are today at fairs and supermarkets. That simple.
Healthy soil, healthy animals – including us – healthy

With studies focused primarily on the soil, its nutrients and the microorganisms that live in it and its intricate relationships, with each other and with plants, Ana Maria Primavesi has proved, for countless farmers, agronomists, agricultural engineers and Some researchers from the most diverse areas in Brazil and the world, the primordial importance of maintaining a fertile, biodiverse and healthy soil to ensure vigorous and nutritious plants. And as a result, to keep animals – including us humans – and all life on Earth healthy, anyway. “There is no rich or poor soil; there is soil alive or dead ”, teaches this Austrian by birth, but who adopted Brazil 70 years ago, when she came here with her husband, also agronomist Artur Primavesi.

Even conventional agriculture – one that uses pesticides and chemical fertilizers – is increasingly turning to the teachings of Ana Maria Primavesi in an attempt to use her techniques to recover lost soil fertility, reverse erosion and reduce the incidence of soil. pests and diseases in crops, as well-nourished plants can better and naturally defend themselves from these attacks.

Finally, Ana Primavesi laid the scientific basis for the viability of tropical organic agriculture – which logically existed here before the Green Revolution, but without academic backing – through the ecological management of soils.

This entire saga of almost a century of life has already been told by geographer and teacher Virginia Knabben, who wrote the biography “Ana Maria Primavesi – stories of life and agroecology” (People Expression Publisher), launched three years ago and already in its second. edition and sold 4 thousand copies.

Now Virginia has gone a step further by devising – and launching today as a gift at the agronomist ‘s 99th birthday – an entire site dedicated to Ana Maria Primavesi. It’s all there, at the link www.anamariaprimavesi.com.br.

Built by Studio Irà, by Mario Vasconcellos Espinoza and Bastian Meyer, and illustrated by visual artist Pamela Simioni, the site will bring together texts that Virginia has been publishing for just over three years on the Facebook page dedicated to the agronomist and more. “This site, which we started preparing two years ago, will be practically the entire collection of Ana Maria Primavesi,” says Virginia.

She says the idea came from the Facebook page. “In this page, which already has more than 27 thousand followers, I feel that sometimes important content ended up getting lost, because as we insert texts in the timeline, the previous ones are falling down and leave the main screen”, he justifies. “There is no way to post content systematically, as you can do on a website,” he continues.

So, from today, the contents of a lifetime will be open for consultation – and are 99 years of Ana Maria Primavesi, let’s remember! Right on the homepage, the essence of the agronomist’s teachings on soil: Pamela Simioni’s illustration is “scrolled” on the page until it gets to the point, rich soil full of life and microorganisms working to ensure life and balance on the surface.
99 years of content and research

Regarding the content, the site is all open and for free offers an extensive production of Ana Maria Primavesi over all these years. They are scientific and technical articles; power points; texts in English, German, French and Spanish that Ana Primavesi herself wrote; the “Farm Letters”, which were published monthly in the extinct Guia Rural magazine, published by Abril; a summary of Ana Primavesi’s biography; people who were important references to the agronomist – “Especially the teachers who made it so special,” says Virginia – in addition to all of Primavesi’s books, including the classic and reference to date for those who practice organic or conventional farming, “Ecological Management from soil”.

There is also room for all the press reports about the agronomist, including this one, from Estadão, when her biography was released, and a link to “Curiosities”. In this link, Virginia says it will be a site within the site itself. “This part will tell the story, for example, of how the film about life on the ground was made, there will be the story of one of Ana Primavesi’s sons, Arturzinho, and his wonderful drawings, the Kirlian photos she made to check the plant energy; the family tree in your family, and many other things, ”says Virginia.

All this content is organized in six parts on the site: “Collection”, “Biography”, “References”, “Books”, “Press” and “Curiosities”. Besides, of course, the “Contact”, where Virginia tells a little about herself and the team that made the site viable.

The artist Pamela Simioni, for example, who made all the drawings – apart from those of Ana Primavesi herself, in the “Biography” section – reports that the colors used to compose the palette are from soil paints collected in the state of Rio de Janeiro. January by the staff of the Soil Museum of Brazil, the Federal Rural University of Rio de Janeiro. “Thanks, by the way, for sharing these materials,” says Pamela.

Virginia says that, despite having been formatting the site’s content for two years and trying to include as much of Ana Maria Primavesi’s production as possible, “there is still a long way to go because her production is extensive,” she says. “Classes, for example, will be for a second phase of the site.” In any case, Virginia ensures that those interested in learning about agroecology, soil life, ecological pest and disease management, plant nutrition, organic farming, recipes Medicinal plants, interrelationship between nutrients and their effects on plants, animals and, consequently, humans will already have a vast amount of material available.

By the way, congratulations on the 99 years, Dr. Ana Maria Primavesi!