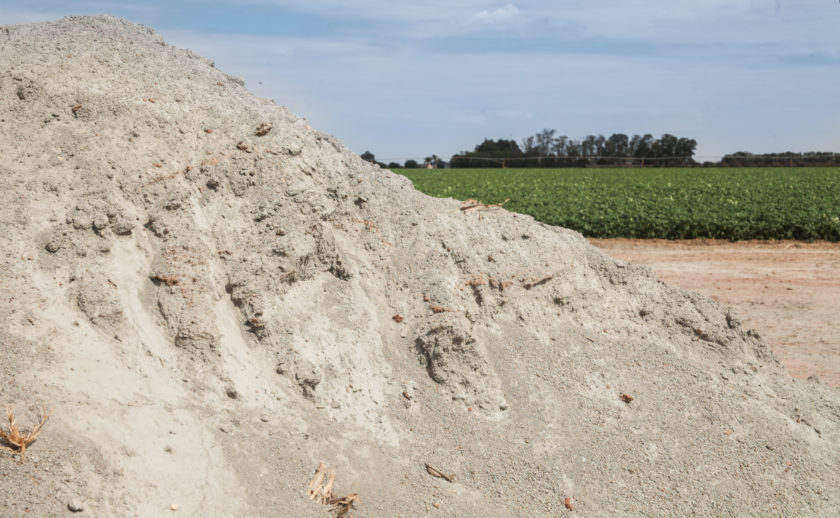 In Brazil, there is a growing adhesion of rural producers to sustainable and economical agriculture practices, which use more bio-inputs and biological organisms. To improve plant fertility and reduce production costs, thousands of farmers in the country have started using so-called soil remineralizers in different types of crops.

Experts point out that this movement has enabled the search for natural sources of nutrients, such as rocks and stones, which contain minerals with the potential to recover soils in more arid regions.

According to the Brazilian Agricultural Research Corporation (Embrapa), it is estimated that the planted area in Brazil with agriminerais already exceeds two million hectares. Only in Goiás, pioneer state in the use of new inputs, there are records of at least 250 thousand hectares planted with mineral or biological fertilization.

The objective of the producers, mainly small and medium, is to reduce the dependence on high price chemical inputs and to guarantee the profitability of the crop. However, their main complaint is the low supply of efficient domestic inputs in the market. About 95% of potassium chloride, for example, one of the most used fertilizers in Brazil, is imported. “We want to practice agriculture that is made with regional inputs, so that the money stays in the region. So we work with rock dust, natural phosphate, mulching plants of our nature, some exotic ones that put fertility in the soil, and the bioinsumes, which are bacteria, fungi, efficient microorganisms to recolonize the soil, ”explains Rogério Vian, rural producer of Mineiros, southwest municipality of Goiás.

Vian chairs the Sustainable Agriculture Group, known as the GAS, which was created with the aim of changing agricultural production paradigms and defending the freedom of producers to choose inputs considering the regional context of properties.

In partnership with the Brazilian Association of Soy Producers (Aprosoja), the group already mobilizes more than 2,300 farmers across the country who practice different methods of fertilization, management and seek new types of inputs of biological origin.

One of the regional remineralizers or agro-minerals that Goiás producers have prioritized is rock dust, which can be applied directly to the soil or along with conventional soluble fertilizers.

“We recolonize the soil and put biology, which is being lost with the high use of inputs. Rock dust rebuilds the soil, because all the soil was formed by rock, but with the weathering of millions of years, the soil became impoverished, ”explains Vian.

A survey by the Institute for the Strengthening of Agriculture in Goiás (Ifag) points out that fertilizers and pesticides make up almost half of the production costs of conventional soybeans, for example. In the latest estimates of the institution, the profitability of soybean producers has been negative, a fact that has generated indebtedness of farmers, according to members of the sector.

“Producers are not happy to use pesticides. So, the idea of ​​the sustainable agriculture group is to bring a new tool to the producer so that he can produce at a lower cost and ultimately produce a healthier food, ”he says.

One of the leading researchers on the subject, agrogeologist Eder Martins, who works at Embrapa Cerrados, points out that the alternative planting system has direct and indirect effects on plantations and represents a viable solution to return the profitability of agriculture.

“This whole movement is linked to the sustainability of the activity. The viability of agriculture is a crucial issue today. In fact, agriculture has always been organic, but over time emphasis has been placed on chemical inputs. However, there is technological exhaustion, and when this exhaustion hits your pocket and does not close the bills, it means that the model is not being viable, ”he points out.

Martins warns that agriculture based on natural inputs presupposes the use of mineral nutrient sources, biological pest control organisms and cover crops to protect and nourish the soil, but does not replace or eliminate conventional inputs such as fertilizers or chemical pesticides.

“This new model is a type of organic farming that is not incompatible with the previous model, nor is it prejudiced with traditional inputs. But it is not possible to have a solution by just one aspect, it is necessary to have input association. We still need pesticides as one of the tools. And we will continue to use fertilizers, the difference is that we will be more economical ”, explains Martins.

The expert points out that in areas where there is verticalization of the poultry production process, for example, agribusiness residues, which are very rich in nutrients and beneficial microorganisms for the soil, can be better used to compost with rock minerals.

“It is the pursuit of economic sustainability and in this process you will also find environmental and social sustainability, because it will stimulate the development of new regional production chains and enable resources to circulate in the agricultural regions themselves,” he says.

According to the expert, conventional soluble fertilizers, usually made from nitrogen, phosphorus and potassium, have low efficiency if not well applied, and the composition with minerals has the advantage of better nutrient utilization.

“When the process is well done, we can effectively use only 50% of these elements. We have recent results showing that it is possible to increase productivity when you combine soluble fertilization with these new agriminerals. ”

One of the pioneers in the use of soil remineralizers in Goiás was Giberto Yuki, who produces cereals in the Cristalina region, about 100 km from Brasilia. In an area of ​​approximately 1,200 hectares, Yuki plants soybeans, beans, corn and wheat with rock dust fertilizer.

A native of the interior of Paraná and of Japanese origin, Yuki arrived in Cristalina in 1988, attracted by the second stage of the Japanese-Brazilian Cooperation Program for Cerrado Development (Prodecer), created in the 1970s to boost agriculture in the central region of the country. .

The program was developed by the federal government in partnership with the Japanese International Cooperation Agency (JICA) and provided for the provision of settlements and machinery to settlers selected by accredited cooperatives to stimulate agricultural production without deforestation of large areas and with low environmental impact.

Following the program’s premise, Yuki still produces in two settlement areas and in other areas she has acquired over the years. In 2015, the producer began testing mineral inputs and, since 2016, has been using rock dust and natural phosphate throughout the planted area.

The producer also rotates crops and, to protect the soil between crops, has set up brachiaria plantation areas with a mix of ground cover plants such as millet, turnip, buckwheat and sudan grass, all planted with rock dust. . He explains that the cover provides biodiversity, brings a large amount of straw and forms roots of more than two and a half meters that attract organic substances and good species of microorganisms.

The results were realized in the first three years. According to Yuki, only by reducing the use of conventional fertilizers, production costs fell from 25% to 30%. “It has stabilized good average productivity in the range of 61, 65 bags at a lower cost. We achieve average productivity with higher profitability at lower cost, ”he said.

Since 2015, producer Giberto Yuki (left) has been using mineral inputs in his crops – Photo: Map

Yuki also realized that the plants are more resistant to pests and diseases, and thus halved the use of chemical pesticides. He says that in the case of maize, for example, in which three to four fungicide applications were made per year, last year’s crop required only one and a half applications. And in one of the fields that will be harvested this year the control was made only with biological organisms.

“Rock dust provides uniformity of the area and better resistance to some diseases and pests. It doesn’t mean you don’t have to use insecticide, but it does give some reduction in attack, ”says Yuki.

To make biological control of pests and diseases, the producer uses commercial biodefensives and installed three years ago a biofactory where it produces bacteria and other microorganisms. Recently, Yuki also started using homeopathic medicines. “Homeopathy is more about improving the plant’s life force and correcting any imbalances,” he says.

Remineralizers have been used especially in grain crops, but there have been positive experiences with results of improved production quality and increased pest resistance in sugarcane, eucalyptus, rubber and fruit crops.

On neighboring Yuki’s property, rock dust has also been used for planting garlic, onions and carrots. Partners Guilherme Shiniti Koyama and Henrique Massakatsu Sakamoto of G9 Agribusiness decided to use rock dust after encouragement from other producers and noticed a change in product quality and even productivity.

“Overall, the advantages are quality and health. I saw quality on garlic skin and rooting. Having root with sanity the production also increases. And the carrot has increased weight, on average one kilogram more per box, ”says Guilherme Koyama. After starting using rock dust, Guilherme Koyama noticed an improvement in the quality of products, such as garlic. Photo: Map

Despite the benefits already perceived, producers warn of the lack of consultants and agricultural technicians specialized in this type of bio-input. Farmers also expect increased availability of products certified by the Ministry of Agriculture, Livestock and Supply.

“We have to assume that research and answers to this demand are lacking, because all institutions now that they are beginning to realize the importance of the topic. The farmer is using it and does not know if the dosage is correct, if this is the best cost benefit, that is, the agronomic part is not yet well studied. And the research is long term, so you need to create research programs, ”suggests Martins.

These are topics that the Ministry is working on. According to Law 12.890 of 2013, remineralizer is a material of mineral origin that alters the fertility indices and biological activity of the soil through the addition of nutrients. The registration and supervision of this type of input were regulated three years ago by the Ministry through normative instructions.

“We have seen a concern about the use of pest management products, but we know the miracle of Brazilian soybeans, which is largely accomplished by the issue of biological inputs, which is the case of biological fixation, the case of rhizobia. It is with this scenario that the Ministry is working in the light of the need to look at the sector with its particularities, ”says Mariane Vidal, coordinator of the Bioinsumos program, in Mapa.